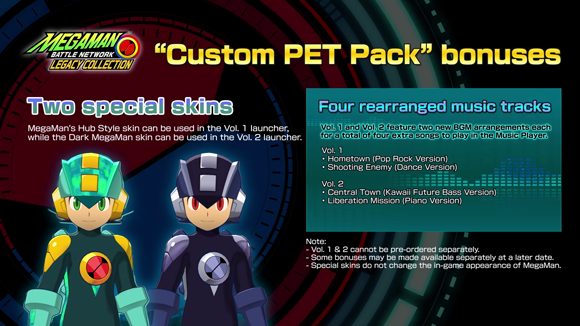 Mega Man Battle Network Legacy Collection Vol. 2 will be available for purchase from April 14, 2023. Please be careful when pre-purchasing the game as Vol. 2 cannot be pre-purchased on its own.


The Battle Network is back! Get ready to jack in to the net to face off against deadly enemy programs in electrifying grid based battles, and search the net for rare and powerful BattleChips to build the ultimate deck of special moves!

In 200X, the rapid advancement of Internet technology has created the “network age.” People have come to enjoy the benefits of network technology through portable exploration devices called “PET” and personality simulation programs called NetNavi. As the network world expands and life becomes more convenient, however, network crime is raging. Main character Lan Hikari and his NetNavi, MegaMan.EXE, join forces to confront these incidents.

The games in this collection are playable in English, Japanese, and Simplified/Traditional Chinese only.
Minimum:
CÓ THỂ BẠN THÍCH